Hackers: How Dangerous Their Activity Is For Crypto Market

Ransomware attacks have become much more frequent these days, expanding their aggression beyond large firms or government agencies over ordinary users. Let's figure out what the ransomware is and how to protect ourselves from the risk of being hacked.
Share this

In their malicious activities, ransomware hackers often use viruses which infect devices and get the necessary information, block computers, corporate networks and much more to receive money for restoring normal running.

In addition, hackers can break into the database and download any confidential information from it: personal, corporate or even classified data. And then hackers send a note demanding money for nondisclosure and removal of any existing copies. However, it’s important to understand that the main goal of the ransomware is to disrupt the website's work, which most often does not affect the safety of users' assets.

How It All Started

After 2010, the attacks became really aggressive. Sinc hackers began to demand more and more money in various cryptocurrencies, like Bitcoin, Ethereum, Monero and others. Different countries began to search for a solution to this problem. For example, the governments of some countries are tightening the regulating policy for digital currency or even trying to ban it.

According to the analytical data from Statista, there was a major spike in the number of cyberattacks in 2016. During one year, 638 cyberattacks were registered. Fortunately, in the following years this indicator decreased slightly. But the attacks did not disappear. 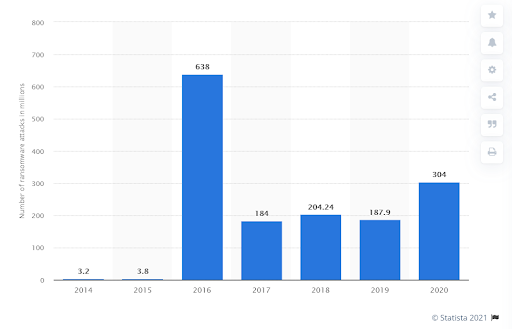 In the first quarter of 2021 malware attacks, according to Check Point Research, affected 102% more companies than in the same period in 2020.

Many companies prefer not to disclose the fact of being hacked so it is difficult to estimate the scale of the total number of successful hacker attacks. But there is no doubt about one thing - their appetites continue growing. 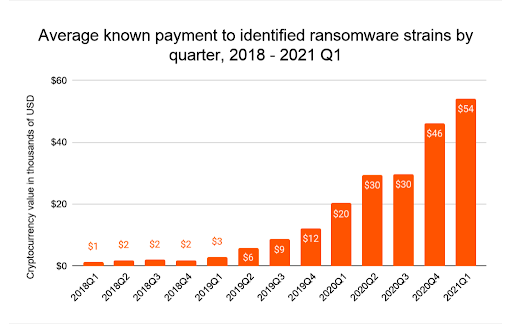 Cybersecurity Ventures analysts are sure that by 2031 the damage from cyber ransomware attacks will increase to $265 billion.

The entire hacking system is based on the fact that attackers communicate with each other remotely, without knowing anything about anyone. That is why it is difficult to prevent such hacks totally.

According to Cybereason's research, 80% of those who paid money to ransomware were attacked again. In 2020, victims of cyberattacks paid more than $406 million in cryptocurrencies, according to Chainalysys. 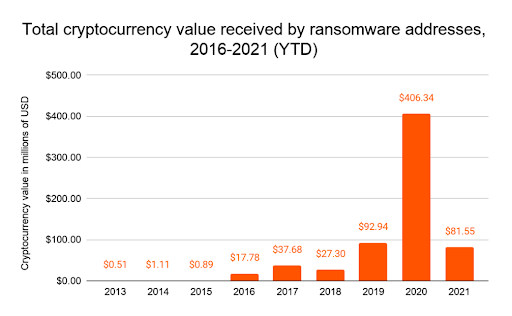 All these research data only reveal the degree of hackers’ insolence. Of course, there is always a chance of a database leak, especially in case of a targeted and well-prepared cyberattack. But if your account is properly secured, it will be much more difficult to hack and get your data.

For example, to protect your data, you should go through the verification of your account and set up two-factor authentication (2FA). These tools will help protect your account from hacking, or at least make it more difficult for hackers to access it.

As the hacker’s tricks are developing, so do the security systems at the technological and legislative levels. The governments of many countries are considering creating or already have strict rules regulating cryptocurrencies. Perhaps, soon the authorities of different countries using the existing mechanisms for tracking transactions, KYC/AML-procedures on the exchanges and introducing new methods of regulation, will be able to not only track cybercriminals but also prevent all of their attacks.

How to Secure Your Account On a Cryptocurrency Exchange?

How NFTs Are Created, How They Work And Why Are They So Popular

How Does the BTC-Alpha’s Referral Program Work